Unsure of the best way to approach Abel Tasman National Park, one of New Zealand’s remarkable beauties, and not wishing to start the trek for several days, leaving our baby elephant van behind… It was in this uncertainty that we found ourselves as woofers in a small farm near Takaka. It was finally from this small village hidden behind an imposing hill that we had the chance to discover part of the Tasman region. 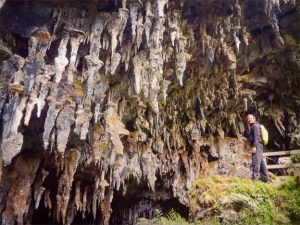 Our first discovery was an absolutely impressive cave.

To reach it, that requires 2 km of walking including 1km of a very nice climb, but it’s really worth the effort.

This gigantic hole naturally formed in the rock, reveals a ceiling covered with stalactites or rather, for the purists and scientists, with “phytokarst” formations. A rare sight, which leaves speechless. We didn’t expect to find such a large cave with so many formations, it was a very nice surprise and a discovery that we can only recommend. 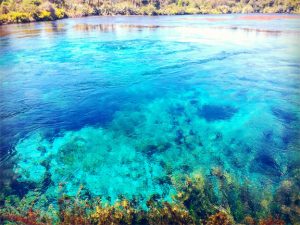 A nice little walk perfectly arranged between gravels and footbridges to discover the Pupu Pupu springs.

In order to preserve the place, it’s asked to don’t touch the water, so the only way to appreciate these springs is unically visual. A quiet place, a crystal clear water and an impressive flow of 14000 liters per second, as evidenced by the speed of the current. 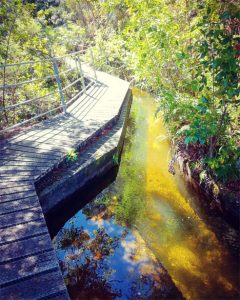 As its name indicates, this loop takes you along old hydraulic installations, between aqueducts and gold mining equipment.

Nothing inescapable, however if you are in the area with a little of time in front of you, it remains very nice.

The path has been laid out in such a way that we sometimes find ourselves walking on the small concrete edge of the canal between water and the void. A bit of adventure that is not displeasing, the rest of the walk is however of limited interest. 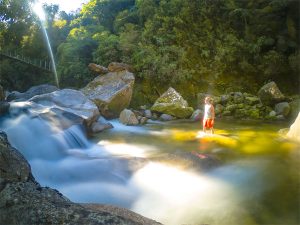 Beautiful waterfalls on the edge of Abel Tasman National Park, a beautifully landscaped setting and trail. A brand new footbridge and shores of white rocks where to bask in the sun to rest and cool off in one of the river natural pool. The waterfall has a fairly impressive flow. In fact, you can’t go to observe it without receiving water spray. A nice place to discover where you can get some rest on the banks of the river.

Indeed, after you parked on the parking area, you have to cross the pastures covered with sheep and a small piece of “bush” to reach the stretch of white sand. In other words, the walk is more than typical.

On arrival is an immensity that you discover, sand dunes, islets of greenery and rock excavated arches and wild seals. We will not deny that it’s a pretty awesome landscape. 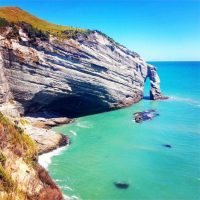 Let’s talk about the northern tip of the South Island, or Cape Farewell. We have unfortunately not been transcended by the place, despite that we can discover a beautiful arch excavated in the cliff overlooking the sea. There is clearly nothing to see, not even a lighthouse.

No regrets, however, since it was on our way.

It’s of fame to discover the park on a several days trek, a hike for the day by taking water taxis that take you where you want, or on a guided tour between kayaking and hiking. 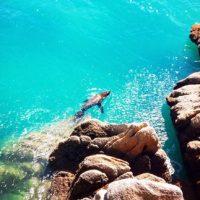 We opted for one day hike option, by our own. To do it, we drove the track leading to Totaranui car park, in the middle of the park, and decided to take the walk until “Separation point” and return.

A beautiful stroll, between bush and heavenly beaches that lead to a white rock tip, where the sea currents form a visible separation. This is where we picnicked with the wild seals ballet and meet our first pygmy (blue) penguin. A magical moment in an exceptional setting. 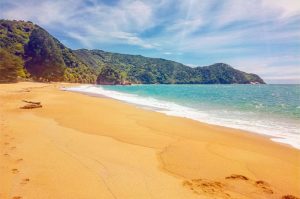 To complete the discovery of the park, we also went to the southern tip of this one by road, to the “split apple” rock. Spherical and divided into two parts, it looks like, effectively, a cut apple.

Beyond this curious rock, the beach which surrounds it is splendid, wild and almost perfectly preserved, it’s nice to swim there and visit the rocky cavities which border it. 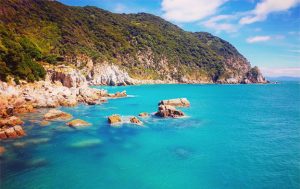 Going south along the coast, it’s possible to stop on the wide and pleasant Kaiteriteri beach, take a break in Motueka to stop at low tide on a ship wreck, then continue to the Mapua wharf to end the day with craft beer, fish’n’chips and ice cream.

Well, after all, why not ?! In addition, it’s possible to jump into the water from the dock, which is rather fun. 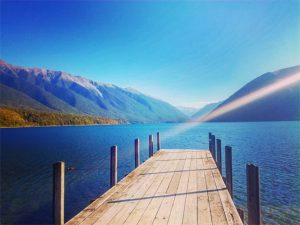 We will close our road trip in the Tasman region by a hike and a swim in St Arnaud on Lake Rotoiti. Another beautiful place, where we can swim among the curious and sometimes imposing eels, and where the Mount Robert reveals a pleasant point of view.
It’s also here that we had the nice surprise to meet another travelers couple, the Diabolokiwi, with whom we have shared the road over the few days that followed.

Perfect moment with my girl @yealen Enjoying the